If you wanted to describe it to someone, you would say – “it’s like Facebook, but from Google”.  And that it seems is what the vast majority of blogs, tweets, articles and other reviews have been saying.  Everyone is comparing Google+ to the power house that is Facebook.

If you look at how similar the screens are you can understand why (source TechCrunch). 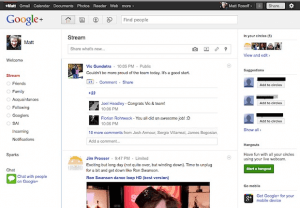 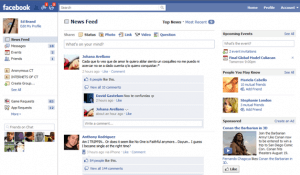 Google+ has some nice tweaks of course – circles seems like a fantastic way to deal with the issue with different groups/personas and the interface is crisp.

But Google+ will not kill Facebook; sorry Google, but it won’t.   Facebook is not just a website, it is a habit and a lifestyle for millions of people.  In order for someone to leave Facebook and move to Google+, all of their friends would need to move en mass and this is simply going to happen.   To compete with Google, Facebook simply needs to match Google’s functionality and that is not going to be hard to be honest.

The company (and their $4.5B valuation) that should be nervous is LinkedIn.  This social networking site targets business users most of who live in the online world that Google dominates.  These users (less than 100 million) are familiar with Google and its peripheral products.  LinkedIn does not have the brand loyalty or user “lock in” that Facebook commands.  Google and Google+ could easily satisfy LinkedIn’s purpose.. and they could do it well.

I would use Google+ to achieve the above, but I would not leave Facebook.

I have watched this past week with fascination.  It seems that everyone (perhaps including Google) is looking in the wrong direction.  They should knock out LinkedIn – build their user base and then, just then – they may have a real chance to challenge Facebook.

One Response to Google+ should be targeting LinkedIn not Facebook