My house hates wifi. There’s always been a few places where the signal is either terrible or non-existent – and of course the worst place is “my chair” where I use my iPad and laptop the most.

And I’ve tried everything to fill the gaps – wifi extenders, multiple access points, powerline networking, and so on. I have a closet full of shamed and inadequate networking devices that I sometimes glare at; shaking my head with disappointment. #bitter

I purchased the Asus RT-AC87U (AC2400) router last year after reading a press release about its launch. It was so new at the time that I had to order it from a supplier in Hong Kong as it hadn’t been released in the UK.

This router is an ugly beast. It has four antennas and can apparently service an area up to 5,000 square feet. But it is easy to set up, very fast and has completely eliminated all of my “booster” devices. Every inch of my house is now covered with a solid wifi signal and I couldn’t be happier.

Have a look at CNET’s performance tests from last August.

This the 5GHZ test – pretty much blows everything out of the water depending on range. 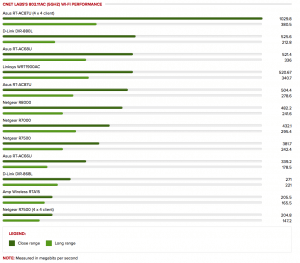 But here’s the even more impressive 2.4GHZ results – which is what really matters as this is the primary frequency that I have to use in my home (victorian terraced home over three floors): 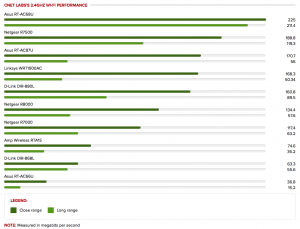 With my previous routers, I needed to make some “advanced” tweaks to the wifi settings to really get the most out of them. But with the RT-AC87U, I haven’t made a single adjustment… it works perfectly, right out of the box.

Not much more than I can say. If you are having signal issues, then take a look at this router – it really is the best wifi router on the market right now.