I have a love hate relationship with my broadband provider (VirginMedia).  Their products are pretty great… when they work.  When they don’t work and you have to suffer the hell that is their customer service (in particular the offshored parts), then you are willing to throw everything away and start again.  It’s even worse when they become oversubscribed in an area and don’t seem to have a plan for upgrading the hardware to keep up with demand.

This is what happened to me in April of this year.  My internet went down on Friday night at 6pm.  I spoke to their customer services six times over the weekend – the Indian team even hung up on me once!! – and they basically said that this was my future with them – that my connection will be slow due to it being oversold and it wasn’t going to be fixed until October.  This made no sense to me considering the fact that they were also having problems with their tv network at exactly the same time – but I was told it was unrelated.  They basically said that go.. use someone else, because you’re not going to get a good service from us for at least six months.

And so I took their advice – I ordered a new service from their competitor BT and their new “fiber” broadband (fiber is in quotes because I do believe that BT are misleading in their advertising – more on that below).

The following week, my TV network was still down – despite all the forums saying that the issue had been fixed.  And so I rebooted my 2 tivo boxes – just to see if it would solve the problem.  It did.  And amazingly, it also solved the issue with my internet – I have no idea why, but I knew there had to be a connection somehow.

So now my fast cable connection was back up and running – without any issues.  But I had ordered BT Infinity and decided enough is enough with Virgin and I still wanted to move.  And then, Virgin sent me a note to say that they had upgraded my connection to 120Mbps – for free.  I checked and sure enough, 120Mbps and fast!  I cursed them and their cunning plan to seduce me back.

And then, I thought – why can’t I have both?  How can I make the most of Virgin Media’s speed and eliminate the reliability issues — what if I could build in some fault tolerance into my home broadband connection?

I found a blog post by Matt Mullenweg (WordPress founder) describing similar sorts of issues and how he went through a few solutions before arriving at the Peplink Multi-wan routers.  More research and scouring of reviews and I settled on the Peplink Balance 20 Dual-WAN Gigabit Router for £269 (a bargain if it works like I was hoping it would).  So I decided to keep my Virgin Media connection AND install BT Infinity too.

On 1 May, a very irritating and unhelpful BT engineer installed my new BT line… a quick side note:  BT advertises Infinity as a fiber product which it is.. sort of.  BT Infinity is fiber to the cabinet and then your existing copper phone wires to the house – they use higher frequencies to achieve higher speeds, but it is still ADSL/VDSL.  The maximum speed I can ever get from this technology from BT is 80Mbps – due to the distance between my house and the cabinet.  Virgin Media is fiber in the street and they use coax cables (which surely should be replaced with Cat6 soon) which means that the speeds will always be faster than what BT can offer.

Complete fault tolerance – using two totally different networks and different technology.  I could pull the plug on the BT line and my connection was still up.. plug it back in and then unplugged Virgin – same.  Bliss.

But something I hadn’t expected – the Peplink actually uses both lines simultaneously.  This isn’t a failover solution – it actually maximizes BOTH connections which speeds up / perhaps doubles your internet speed!!!

Take a look at my current Internet speed after the install:

150Mbps!!!  It maximised the available speed from both connections and it seemed to also use the faster uplink speed too (you set up in Peplink the theoretical maximum speed of each line to help it make decisions).

Here’s how my network is structured now: 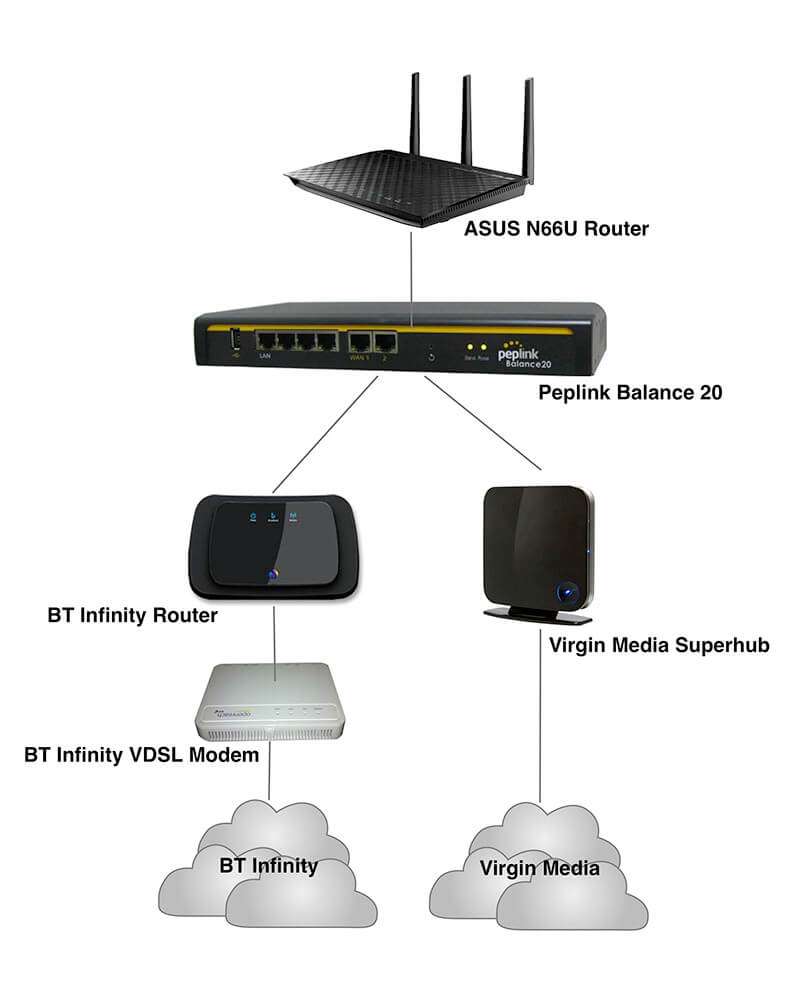 If you want to really get a more fault tolerant home network, then I highly recommend this solution.  The connections from BT and/or Virgin are not that expensive – this solution costs me an extra £20 per month which I think is worth it.  But you don’t just get a more reliable connection – you get a faster one too.  Win-win.