I’m a big fan of Chrome on the PC, and so when Google released Chrome for the iOS platforms (iPad and iPhone), I had to try it.

When you first load the app, it asks you to log into Chrome.  One of the major benefits of this app is that you can synchronize Chrome between all your devices (more on that later).  But in order to do so, you have to have a Chrome account — ff you are using Google Apps (like I do), then you must enable “Google Chrome Sync” to get this part to work. You can either sign in or skip.

It’s important to point out that Chrome uses the built-in HTML renderer to display pages – Google has no control over this.  And so really the app is nothing more than a wrapper to this rendering engine (webkit).  In fact, Apple does not let Google have access to the more powerful JavaScript engine built into iOS5 and so at times, the browser will actually be slower than Safari.  But Google built the app with a different approach to the UI and with a few extra features (sync and voice search) in mind.

My first impressions are positive – more so on the iPad than the iPhone, but this is a nice looking app.

For me, The iPad app feels more natural and less crowded: 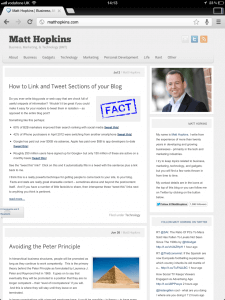 The tabs are clear and look just like I am used to on my desktop PC.  You can view multiple tabs – and even load additional windows.

Here’s the same page in the iPhone version: 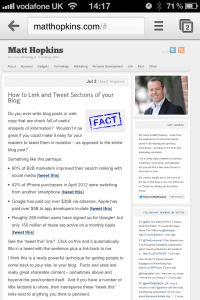 Tabs are less clear, there is less room on the address bar.. it just feels a little bit more clumsy compared with the iPad.

Google has added voice search as a built-in feature to the Chrome app.  Just press the microphone on the toolbar and speak your search – very simple and pretty accurate too from my tests. 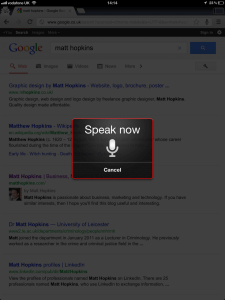 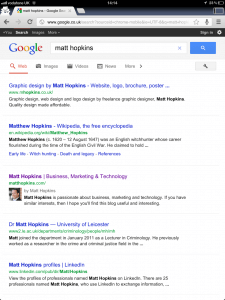 You can also create “Incognito” sessions that are not stored in your browsing history and all cookies that are downloaded are deleted afterwards.  And so this is not “anonymous” browsing, but probably more like “disposable” browsing.

The sync feature is really pretty nice too – and is probably the main feature that would make someone want to use Chrome over Safari.  If you sign in to your Chrome/Google account, then you can sync bookmarks and tabs too.  This means if you are looking at a few pages on your desktop pc at work and need to leave, those same tabs will be open on Chrome on your iPad when you are on the train, and then whatever you were looking at on the train – will be open when you get home and fire up your Mac.  This is a really neat feature and I can see why Apple are looking to build something similar into iOS6 for Safari.

When you try to use the bookmarks, however, is when it all falls down.  Google is not known for its UI design – certainly not when it comes to devices or apps and Chrome is no exception.  Navigating bookmarks is painful, confusing and pretty much erases all the benefits of syncing (in my opinion).   When I’ve been using it this week, I started to long for the simplicity of Safari’s bookmark submenu – it is a much cleaner and useful interface design. 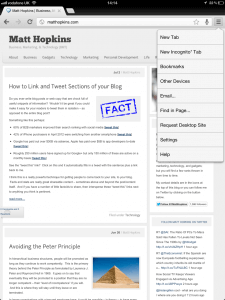 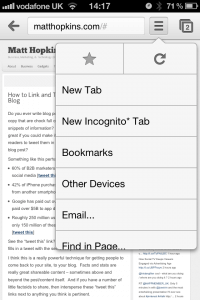 Also – I don’t understand why Google is using their own keyboard for address bar (url) entry.  It is so much less effective than the default Apple version – especially with international addresses and keyboards (in Apple, you can hold your finger on the .com to get other variations – such as .co.uk or .net, etc). 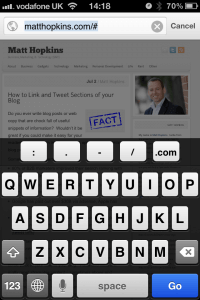 So here’s the final review as far as I see it:

It’s a nice effort but with some real flaws.  And so if you are a huge Chrome fan – then this app is for you.. but to be honest, it doesn’t do much more than the default / Safari app and it cannot be a “default” app for loading pages natively, and so I don’t think it is worth the hassle.  Wait for iOS6 in a few months if you want syncing.