One of the benefits of the Apple Watch is that it monitors your heart beat every 10 mins or so which then gets stored in the HealthKit app. When combined with the number of steps, floors climbed and distance walked, you start to get a faily complete set of health and fitness metrics right there on your phone.

But what about blood pressure? I have a manual blood pressure monitor that I picked up a couple of years ago from Boots – but who wants to manually enter two numbers into the HealthKit app every day? I mean those are ten seconds that I will never get back from my life.. right?

And so I decided to get a bluetooth blood pressure monitor that communicated with my iPhone and also stored its data in HealthKit. 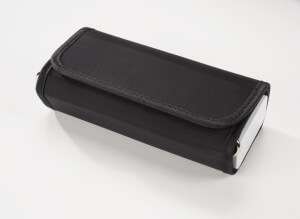 In May, I purchased a Qardio device from Amazon.

This is a nice looking piece of equipment. It is compact and comes with a great app that synchronises with HealthKit (most of the other devices didn’t at the time).

When it works, it does what it is meant to do – record your blood pressure. The problem is.. that it doesn’t work very often. It looks great but has a serious design flaw. You see the QardioArm turns on and off automatically when you open the strap. There’s a magnet in the armband that is meant to turn the device on and off when you open or close the strap. Notice how I said .. meant to.

Unfortunately, it didn’t switch on at least 50% of the time. It was really annoying and so I contacted their technical support who were super helpful. They apologised and instantly dispatched a replacement unit.

My new device arrived. I unpaired the old unit and paired the new one (not without some difficulty mind you). And it worked. Great! And then it didn’t. I got back on to the tech support who were once again very helpful. They even arranged a call to go through the device. It didn’t work while on the call.. and then it did (typical). But then it didn’t.

I think this is one of those situations where the arrogance of design undermines the simplicity of a good old fashion power button. If the design worked without an on/off switch then great… but it doesn’t. Put a power button on this thing and don’t make something unreliable all in the name of “design”!!

So now this useless device sits in my desk drawer with the rest of my unwanted gadgets. 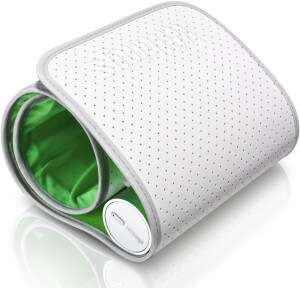 When I ordered the Qardio, the Withings app didn’t support HealthKit… but due to Qardio’s failings, I purchased the Withing Wireless Blood Pressure Monitor anyway.

When I got the device and installed their app, the good news was that it could sync its data with HealthKit after all! Perfect – ten seconds of my life recovered!

The Withings monitor itself is probably 3x the size of the Qardio – so definitely less portable. But it does feel solid and as soon as I saw the power button, my heart skipped a beat in excitement.

It has a quality feel to it – with the weight, the metal controller and also the padded lining. I like it. You turn it on (with an on/off switch) and it instantly loads the Withings app. Press start and.. what’s more to say. It works.

I now use this device every day and would recommend it to anyone who is looking for a bluetooth blood presure monitor (just don’t expect to travel with it).

Both monitors measure blood pressure and when they work.. the numbers are pretty similar – within 3 points on either side of systolic or diastolic units. Which I think would be considered reasonable. In fact, my old manual device from Boots was way off compared with both of these units and also with the blood pressure machine at my local health centre – and so analog does not trump digital it seems.

In summary, there’s nothing more to say than this – they both measure your blood pressure and seem do it pretty well.. but only one is reliable. The Withings.

Just need to get mine down a bit now.