I’ve always considered the term “drone” to be an emotive word.  Most of the devices out there are simply radio-controlled model aircraft with a small camera attached – devices that have been around for decades without any real public or media interest.  For me, in order for something to really become a drone it needs to have some level of autonomy.

My Phantom 2 Vision+ is a quadcopter (a helicopter with four rotors).  You fly it with a R/C controller and operate the on-board camera with an app on your mobile phone that uses a special wifi link to communicate.  Other than the sophisticated software that makes hundreds of corrections every second so that it becomes pretty simple to fly, there is nothing autonomous about it.  That was until this week.

DJI released an update to their Vision+ app this week that now enables autonomous flight.  They call this feature “Ground Station” and it is unbelievably amazing.

Once you have accepted the legal disclaimers from DJI, you simply access the “Ground Station” features from the standard camera control panel by swiping left. 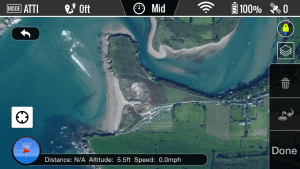 Important: It relies on Google Maps and so if you do not have an internet connection where you are going to be flying – then be sure to load the app at home (or somewhere with a connection).  The software will cache the maps it downloads.

As you can see – the new dashboard is pretty neat.  I won’t go into all of the settings, but once your Phantom has connected to some satellites, it places itself on the map as so:

The red airplane is the current location of your Phantom and the blue “H” denotes the home point.

Notice the faint yellow circle in the image above?  This is the maximum radius that you can fly from your home point (where you are more than likely standing) – this is 500M or 1640ft.  The actual device is technically capable of flying between 800M and 1700M from the pilot and so I suspect that this limitation is an effort by DJI to keep its customers (and themselves) out of trouble from local aviation authorities (e.g. the CAA has a restriction on unmanned aircraft being flown more than 500M from the pilot).

Once your Phantom is connected to satellites and is active on the panel above, all you need to do is tap on the map to create one or more waypoints. 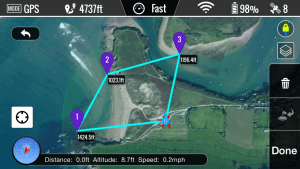 Each waypoint can be moved once it has been created and you can also tap on each one to adjust the altitude at which you want to fly (restricted to 200M).

When you are happy with your flight mission, you press done.. and then when you are ready to fly, simply press “Go”.  The Phantom takes off and flies your mission completely autonomously – it is amazing.  All you need to do is control the camera.

At the top of the dashboard, you can control the flight speed and  you have only three options – slow, mid and fast.  Slow flies at around 2m/s (4 mph), Mid flies at 4m/s (around 8mph) and Fast is 8m/s (around 16mph).

I shot my first video in Mid and found it a bit slow and so I’ve sped it up 4x to give a better idea of the distance without boring people too badly.  The original flight time was 14 minutes

When it comes back to the Home location, it hovers and doesn’t land automatically (you can see in the video that I was expecting it to and landed it myself in the end).

There’s so much more that DJI could do with this new functionality and I really hope that this is just the beginning.  For example:

To be honest, it doesn’t really matter if they implement any of this – this new functionality is so impressive that it will take some time before the awesomeness of it dissipates for me.